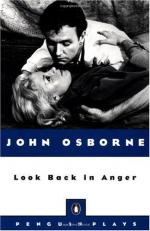 John Osborne
This literature criticism consists of approximately 20 pages of analysis & critique of Look Back in Anger.

In the following essay, Egan considers the enduring appeal of Look Back in Anger, focusing on the character of Jimmy Porter.

If we are reluctant to let go of 1956 as a convenient watershed point in the history of British theatre, we no longer tend to regard Look Back in Anger as a one-play revolution. John Osborne himself long ago pronounced it “a formal, rather old-fashioned play,”1 and with the virtue of hindsight we can identify its technical affinities with the earlier dramatists whose theatre it was once thought to have obliterated: the aphoristic turns of Coward, the set-piece speechifying of Shaw, even the sentimental studies of Rattigan. Yet Look Back remains a unique play. The major revivals that have occurred repeatedly over the thirty years since its première have demonstrated...

Critical Essay by Robert G. Egan from Gale. ©2005-2006 Thomson Gale, a part of the Thomson Corporation. All rights reserved.