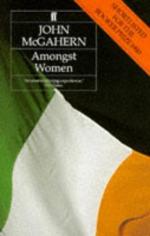 Get Critical Essay by Shaun O'Connell from Amazon.com
View the Study Pack
View the Lesson Plans

John McGahern
This literature criticism consists of approximately 19 pages of analysis & critique of Amongst Women.

In the following essay, O'Connell explores the relationship between McGahern's protagonists and the lands they call “home.”

Throughout most of his impressive oeuvre—four novels and two story collections—John McGahern imagines Ireland as dark, dank and dour. Ireland is a prison to which his characters are sentenced, from which they are unable or unwilling to escape. Their lives, turning in a narrow gyre, embody McGahern's vision of the constricted state of the nation.

However, in his writings of the late 1970s McGahern leads some of his characters through a door into the light, into a problematic freedom, out to an open field in which they first run free, but from which they eventually seek release, so some return to familiar confines. In The Pornographer McGahern turns his hero homeward, back to the same...

Critical Essay by Shaun O'Connell from Gale. ©2005-2006 Thomson Gale, a part of the Thomson Corporation. All rights reserved.