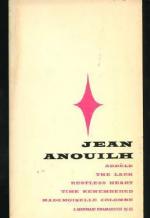 Get Critical Review by Eric Bentley from Amazon.com
View the Study Pack

This literature criticism consists of approximately 5 pages of analysis & critique of Jean Anouilh.

In the following review, Bentley praises the sets and acting in the 1954 New York production of Colombe.

Optimistic plays are very depressing. “Too bad reality is different,” you say in the lobby. It takes a pessimistic play to cheer you up. When you say “Life isn't as bad as that” you are half way to declaring that everything in the garden is lovely. The great tonic of the Broadway season is Mademoiselle Colombe by Jean Anouilh, a tale of the futility of boy's meeting girl.

It is a production of many pleasures Boris Aronson's sets alone are worth the trip to the Longacre. This designer, whose reputation is for thoroughness and grandeur, shows himself, here as in My Three Angels, to have as light a touch as anyone in the profession; his joyous wit and controlled fantasy...

Critical Review by Eric Bentley from Gale. ©2005-2006 Thomson Gale, a part of the Thomson Corporation. All rights reserved.