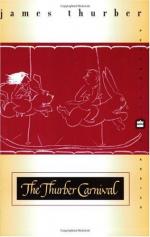 Get Critical Essay by George Cheatham from Amazon.com
View the Study Pack
Related Topics
The Secret Life of Walter Mitty

This literature criticism consists of approximately 4 pages of analysis & critique of James Thurber.

In this essay, Cheatham explores the function of sin, death, and judgment in the fantasies of Thurber's character Walter Mitty.

Serious matters, we now know, bubble and boil beneath the cleverly humorous surface of James Thurber's “The Secret Life of Walter Mitty.” But how much gravity can we ladle from this once-supposed thin broth? Can we possibly infer sin, death, and judgment? Perhaps.

Anne Ferguson Mann moves any interpretation of “Walter Mitty” in a transcendental direction with her description of Mrs. Mitty as an Eve figure, an enabler-scapegoat who makes possible her husband's daydreaming. After citing Richard Tobias's identification of Walter Mitty with the “mind” and Mrs. Mitty with the “body,” Mann says:

What Walter Mitty would ultimately reject is his physical being, half of what it means to be human. Such...

Critical Essay by George Cheatham from Gale. ©2005-2006 Thomson Gale, a part of the Thomson Corporation. All rights reserved.