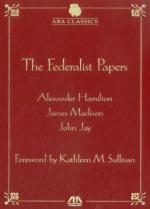 Get Critical Essay by I. Bernard Cohen from Amazon.com
View the Study Pack

This literature criticism consists of approximately 14 pages of analysis & critique of Federalist Papers.

SOURCE: Cohen, I. Bernard. “Science and the Constitution.” In Science and the Founding Fathers: Science in the Political Thought of Jefferson, Franklin, Adams, and Madison, pp. 262-72. New York: W. W. Norton, 1995.

In the following excerpt, Cohen discusses Madison's education in the scientific disciplines and his scientific references in The Federalist papers.

James Madison's early education included the study of Latin and Greek, history, rhetoric, and some mathematics: arithmetic, algebra, and geometry.1 At the age of eighteen he entered the College of New Jersey at Princeton, now grown into Princeton University, rather than following the traditional path of young Virginians to William and Mary. The college had been founded in 1746, twenty-three years before Madison's arrival as a freshman. In 1768, a year before Madison entered as a student, John Witherspoon came from Scotland to take over the presidency of the college. Witherspoon had been greatly...

More summaries and resources for teaching or studying Federalist Papers.

Critical Essay by I. Bernard Cohen from Gale. ©2005-2006 Thomson Gale, a part of the Thomson Corporation. All rights reserved.