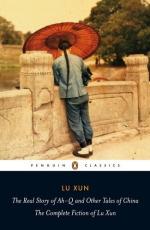 Get Jaroslav Průšek from Amazon.com
View the Study Pack

This literature criticism consists of approximately 8 pages of analysis & critique of Lu Xun.

The following essay was originally presented as a conference paper in 1967. Průšek discusses Lu Hsün's distinctly modern handling of plot and language in the early story "The Past, " observing significant departures from traditional Chinese literature.

This is not the first occasion on which I have considered the emergence of a modern literature in China. There can be no more fascinating subject in the history of Asian literatures than the profound rift separating the modern from the traditional literature and an examination of its causes and significance. Analysis of the nature of this cataclysm dividing two epochs also enables us to penetrate more deeply into the essence of the phenomena surrounding it.

My earlier considerations of this subject dealt with its more general aspects, such...

Jaroslav Průšek from Gale. ©2005-2006 Thomson Gale, a part of the Thomson Corporation. All rights reserved.