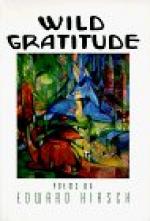 Get Critical Essay by Jay Parini from Amazon.com
View the Study Pack

This literature criticism consists of approximately 3 pages of analysis & critique of Edward Hirsch.

Edward Hirsch writes in For the Sleepwalkers with a slight, somewhat self-conscious, formality, as if he wishes to hold his material in place by distancing himself from it. He achieves this formality—and it is an achievement—by following regular stanza patterns and metering stresses in a given line; in addition, he elevates his diction so that his poetry becomes, in the words of Gerard Manley Hopkins, "the common language heightened." Thus, he opens "Dusk":

He ends this lovely poem...

More summaries and resources for teaching or studying Edward Hirsch.

Critical Essay by Jay Parini from Gale. ©2005-2006 Thomson Gale, a part of the Thomson Corporation. All rights reserved.