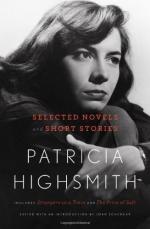 This literature criticism consists of approximately 19 pages of analysis & critique of Patricia Highsmith.

In the following interview, which was conducted on August 19, 1980, in Moncourt, France, Highsmith discusses such subjects as the philosophy of criminology, her portrayal of female characters, and critical response to her works.

[Cooper-Clark:] I recently read, and you can clarify or correct me, that you are not enamoured of the human race. Is that accurate?

[Highsmith:] Not really. I often talk with a sociologist friend, and her opinion is that most people are quite ordinary, that universal education hasn't brought the happiness and beauty that people had hoped. I think human beings are very interesting, however. It is like talking about "a better life." Not everybody wants it, not everybody likes aesthetic things. Why should they? It is a matter of taste. It is one thing to make millions of people literate, to enact...

More summaries and resources for teaching or studying Patricia Highsmith.

Interview by Patricia Highsmith with Diana Cooper-Clark from Gale. ©2005-2006 Thomson Gale, a part of the Thomson Corporation. All rights reserved.