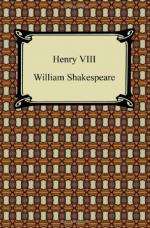 In the following essay, Kurland traces affinities between King Henry of Shakespeare's Henry VIII and the historical King James I of England, the reigning monarch at the time of the drama's premiere.

The allusion to James I in Cranmer's prophecy in the last scene of Henry VIII is unmistakable. Cranmer foresees an ideal reign not only for the “royal infant” Elizabeth but for her successor,1

Critical Essay by Stuart M. Kurland from Gale. ©2005-2006 Thomson Gale, a part of the Thomson Corporation. All rights reserved.