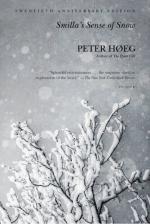 Get Critical Review by Robert Nathan from Amazon.com
View the Study Pack
View the Lesson Plans

In the following review of Smilla's Sense of Snow, Nathan praises the book, especially for its elements of suspense.

Try this for an offer you could easily refuse. How would you like to be locked in a room for a couple of days with an irritable, depressed malcontent who also happens to be imperiously smart, bored and more than a little spoiled? Say no, and you will miss not only a splendid entertainment but also an odd and seductive meditation on the human condition.

Critical Review by Robert Nathan from Gale. ©2005-2006 Thomson Gale, a part of the Thomson Corporation. All rights reserved.