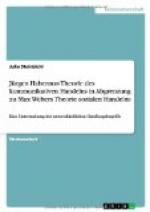 Get Critical Review by David Weberman from Amazon.com
View the Study Pack

This literature criticism consists of approximately 4 pages of analysis & critique of Jürgen Habermas.

In the following review, Weberman explains Habermas's contribution to the field of discourse ethics, defining his methodology and its application to ethics.

[Moral Consciousness and Communicative Action] is a well-translated edition of a book that first appeared in 1983. It has been expanded to include a fifth, more recent essay. The last three essays (two of which are short treatises in themselves) address pivotal issues in ethical theory, such as cognitivism, justification, Kantianism, and moral psychology. They contain the most definitive statement yet of Habermas's original contribution to the field: discourse ethics. It should be noted that analytic moral philosophers will find this book both accessible and relevant.

The first two essays deal more generally with the legitimate aims of philosophy and social science, but they also clarify the methodological assumptions...

Critical Review by David Weberman from Gale. ©2005-2006 Thomson Gale, a part of the Thomson Corporation. All rights reserved.