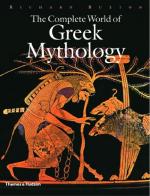 Get Critical Essay by Richard Caldwell from Amazon.com
View the Study Pack

This literature criticism consists of approximately 31 pages of analysis & critique of Greek mythology.

SOURCE: "Texts and Contexts," in The Origin of the Gods: A Psychoanalytic Study of Greek Theogonic Myth, Oxford University Press, 1989, pp. 71-93.

In the following essay, Caldwell reviews early Greek history to Hesiod and examines similarities between Greek and Near Eastern creation myths.

Shortly before the end of the eighth century B.C., a Boiotian Greek named Hesiod wrote or dictated a poem of some one thousand lines on the beginning of the world, the emergence of the first gods, and the conflicts between generations, which resulted finally in the permanent seizure of power by Zeus, ruler of the world and king over gods and men.1 We do not know what name, if any, Hesiod gave to his poem, but it has always been known as the Theogony, the "Origin of the Gods" (the Greek word is theogonia, from theos, "god," and gone, "birth" or "offspring...

Critical Essay by Richard Caldwell from Gale. ©2005-2006 Thomson Gale, a part of the Thomson Corporation. All rights reserved.