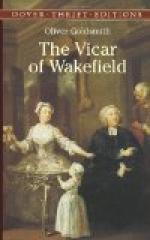 Get Critical Essay by James R. Foster from Amazon.com
View the Study Pack

The Vicar of Wakefield | Criticism

This literature criticism consists of approximately 5 pages of analysis & critique of The Vicar of Wakefield.

SOURCE: "Sensibility among the Great and Near Great" in History of the Pre-Romantic Novel in England, Modem Language Association of America, 1949, pp. 104-38.

In the following excerpt, Foster discusses Goldsmith's views on morality and sentimentality as expressed in The Vicar of Wakefield.

Oliver Goldsmith (1730-74) was not such a strait-laced classicist that he could not see good in Richardson's brand of sentimentality. In fact, he approved of it: however, not without some reservations and the thought that a dash of whimsey and humor might improve it. As for those perfervid souls who yearned for something more intense and drastic in the way of sentiment, he would have none of them. One of the objectives of the Vicar of Wakefield1 was to act as a sedative and febrifuge, and at the same time to set an example of feeling properly controlled.

As a classicist Goldsmith could not believe in...

More summaries and resources for teaching or studying The Vicar of Wakefield.

Critical Essay by James R. Foster from Gale. ©2005-2006 Thomson Gale, a part of the Thomson Corporation. All rights reserved.