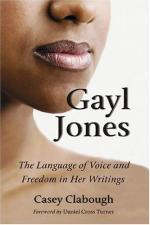 Get Critical Essay by Trudier Harris from Amazon.com
View the Study Pack

This literature criticism consists of approximately 9 pages of analysis & critique of Gayl Jones.

In the following essay, Harris outlines the plot and themes in Jones's narrative poem Song for Anninho.

In Gayl Jones's long poem, Song for Anninho, Almeyda, whose narrative voice we hear, undergoes a spiritual journey which highlights both theme and character. In her explorations of memory and history, Almeyda moves beyond her individuality to represent the destiny of the African descendants who were brought to Brazil in the seventeenth century. Through Almeyda's sights and values, we come to see the strength of her people, and we come to hope—with her—that they might one day establish a spiritual and physical unity which will withstand all oppressors.

Almeyda tells us of the Palmares settlement of Africans who escaped from slavery in Brazil in the 1690s and who, through non-violent raids upon slaveholders...

Critical Essay by Trudier Harris from Gale. ©2005-2006 Thomson Gale, a part of the Thomson Corporation. All rights reserved.