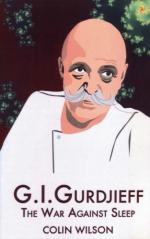 Get Critical Essay by B. A. St. Andrews from Amazon.com
View the Study Pack

This literature criticism consists of approximately 9 pages of analysis & critique of G. I. Gurdjieff.

In the following essay, St. Andrews examines the group of literary figures, including Katherine Mansfield and Jean Toomer, that followed Gurdjieff's teachings.

Many and strange are the tales from the literary crypt. As any quick look at James Sutherland's fascinating Oxford Book of Literary Anecdotes or Donald Hall's American corollary proves, writers seek the ever-elusive Muse in some strange places. Almost with abandon, they delve into cults and the occult; they pursue spiritualists and mystics, sometimes finding inspiration, often times not. But the quest seems a worthy one, no matter how questionable the result.

Not one of the movers and shakers (or the preachers and fakirs) who have created popular cults in our century is more controversial than one George Ivanovich Gurdjieff, an Armenian mystic. Nor has any cult figure, with the...

Critical Essay by B. A. St. Andrews from Gale. ©2005-2006 Thomson Gale, a part of the Thomson Corporation. All rights reserved.