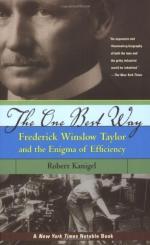 Get Critical Essay by Milton J. Nadworny from Amazon.com
View the Study Pack

The Origins of the Taylor System

Scientific management was fashioned during the post-Civil War era, when business enterprises were expanding in size and scope, and when the mode of industrial production was becoming increasingly complex. This development was generating a separation of the "businessman" and the "captain of industry" from the technical problems of industrial enterprises, for manufacturing was becoming highly mechanized. Automatic and semiautomatic methods of processing goods have by now become characteristic of American industry, but the...

Critical Essay by Milton J. Nadworny from Gale. ©2005-2006 Thomson Gale, a part of the Thomson Corporation. All rights reserved.