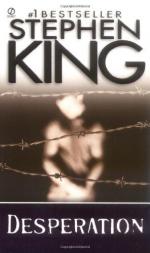 In the following essay, Indick surveys techniques used by Stephen King to create fear in such novels as Carrie, Pet Sematary, and The Shining.

There are stories of suspense, shock, mystery, and, combining all, fear. Ken Follett and Alistair MacLean are masters of suspense: one reads in a whirlwind of action and intrigue, involved for the safety and victory of the hero. Trevanian and Robert Ludlum add the fillip of shock, the hero placed in a paranoid and violent world. The practitioners of mystery are legion, with as many styles, but their content by definition is a puzzle to unravel. Fear is usually achieved as an amalgamation, together with its own particular quality as an emotion, and is associated by most readers with the writing of Stephen King.

More summaries and resources for teaching or studying Stephen King.

Ben P. Indick from Gale. ©2005-2006 Thomson Gale, a part of the Thomson Corporation. All rights reserved.