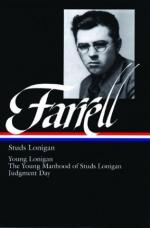 Get Critical Review by Lionel Trilling from Amazon.com
View the Study Pack

In this excerpted review of Guillotine Party and Other Stories, Trilling describes Farrell's artistic vision as inadequate to the task of exploring the complexities of modern life.

Almost all Mr. Farrell's short stories deal with the milieu of the Studs Lonigan trilogy and might almost be chapters of those admirable novels. Indeed, one of the stories is, as Mr. Farrell tells us, the seed from which the cycle grew, and the whole collection seems to be made up of gleanings from the major work.

There can be no doubt of the importance of Farrell's writing. He has brilliantly exploited the theme of poverty, not primarily physical poverty—actual hunger plays small part in his books—but spiritual poverty. His people all live in what one of his few articulate characters calls "a poverty not only of...

Critical Review by Lionel Trilling from Gale. ©2005-2006 Thomson Gale, a part of the Thomson Corporation. All rights reserved.