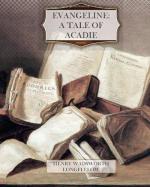 Get Critical Essay by Kirsten Silva Gruesz from Amazon.com
View the Study Pack

In the following essay, Gruesz explores the politics of translation and literary canonicity in Evangeline.

The exile given to me I have received as an honor.

I have also been trying to follow Dante in his exile—a hopeless task.

Amid a sea of celebratory rhetoric surrounding the impending war against Mexico, there came before the reading public late in 1847 a long narrative poem describing the tragic consequences of another nation's imperial designs. The unlawful British invasion that spurs into motion the plot of Evangeline: A Tale of Acadie resonates—dimly but suggestively—with what Longfellow and his circle found most distasteful about the Mexican war: that in violating the territorial integrity of a sovereign neighbor, the US would...

Critical Essay by Kirsten Silva Gruesz from Gale. ©2005-2006 Thomson Gale, a part of the Thomson Corporation. All rights reserved.