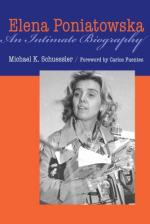 Get Critical Essay by Claudette Williams from Amazon.com
View the Study Pack

This literature criticism consists of approximately 23 pages of analysis & critique of Elena Poniatowska.

In the following essay, Williams psychoanalyzes Jesusa, the main character of Hasta no verte Jesús mío.

During the last two decades critical attention has turned increasingly to women writers in Spanish America and the articulation of gender issues in their work. Along with Isabel Allende of Chile and Luisa Valenzuela of Argentina, Mexico's Elena Poniatowska is part of what might well be termed an emerging canon of Spanish American women writers. Her testimonial novel Hasta no verte Jesús mío (1969) is based on material gathered in a series of tape-recorded interviews, from which she produced a written version of the life of a real working class Mexican woman whose fictional name is Jesusa Palancares and who is the narrator of the story.

Poniatowska's declared interest in the...

Critical Essay by Claudette Williams from Gale. ©2005-2006 Thomson Gale, a part of the Thomson Corporation. All rights reserved.