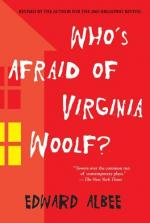 Who's Afraid of Virginia Woolf? | Criticism

Edward Albee
This literature criticism consists of approximately 7 pages of analysis & critique of Who's Afraid of Virginia Woolf?.

SOURCE: "What's the Matter with Edward Albee?," in American Drama and Its Critics: A Collection of Critical Essays, edited by Alan S. Downer, University of Chicago Press, 1965, pp. 240-44.

The essay below contains a harshly negative assessment of Albee's work through Who's Afraid of Virginia Woolf? and asserts that this play enacts "homosexual liaisons. "

The nation's publicity media, desperately in search of a "gifted young playwright," and unable to practice that asceticism of taste which is the requisite of culture, have praised the mediocre work of Edward Albee as if it were excellence. They have made the author of six bad plays into a man of fame and fortune, which is his good luck. They have also made him into a cultural hero, which is not good for anybody. It is time to disentangle our judgments of his merits from the phenomenon of his popularity.

More summaries and resources for teaching or studying Who's Afraid of Virginia Woolf?.

Critical Essay by Tom F. Driver from Gale. ©2005-2006 Thomson Gale, a part of the Thomson Corporation. All rights reserved.