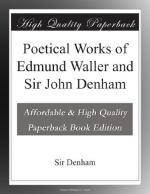 Get Critical Essay by H. M. Richmond from Amazon.com
View the Study Pack

This literature criticism consists of approximately 12 pages of analysis & critique of Edmund Waller.

In the following essay, Richmond looks at Waller's reputation, arguing that he merits more critical attention.

When Waller died in 1687, his tomb at Beaconsfield was dignified by an epitaph from the Historiographer Royal. It is in the usual fulsome, empty style which dissipates trust by overemphasis, but surprisingly its claim that Waller endeared English literature to the muses is approved by Waller's most distinguished literary contemporaries. In Dryden's preface to Walsh's Dialogue Concerning Women (1691), for example, we read, “Unless he had written none of us could write”; and in his preface to The Second Part of Mr. Waller's Poems (1690) Atterbury boldly declared, thinking primarily of Waller, “I question whether in Charles the Second's Reign English did not come to its full perfection; and whether it has not had its Augustan Age.”

Modern critics have, however...

More summaries and resources for teaching or studying Edmund Waller.

Critical Essay by H. M. Richmond from Gale. ©2005-2006 Thomson Gale, a part of the Thomson Corporation. All rights reserved.