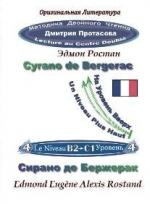 Get Critical Essay by Martin Lamm from Amazon.com
View the Study Pack

This literature criticism consists of approximately 13 pages of analysis & critique of Edmond Rostand.

While Maeterlinck and Claudel had difficulty in gaining stage success with their plays another writer of the same school, but of incomparably lower calibre, Edmond Rostand, succeeded in winning the heart of the great public. Cyrano de Bergerac was the theatrical triumph of the century, quantitatively perhaps the greatest that the history of the theatre has ever known. For some years the young author was universally acclaimed as the king of modern drama. This enthusiasm, however, began to wane even during his lifetime, and in histories of literature Rostand is now dismissed with a lack of appreciation which is as unjustified as the earlier excessive praise.

Rostand was an exact contemporary of Claudel but he came from the south, like his master Victor Hugo...

More summaries and resources for teaching or studying Edmond Rostand.

Critical Essay by Martin Lamm from Gale. ©2005-2006 Thomson Gale, a part of the Thomson Corporation. All rights reserved.