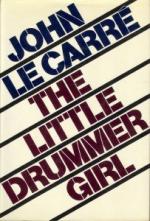 Get Critical Essay by Mark Neyman from Amazon.com
View the Study Pack

In 1778 Daniel Boone was charged with several counts of treason, involving his alleged collusion with the Shawnee Indians and the British. Eckert … has written a fascinating historical novel based on this trial…. The author has a keen sense of time and place, and has thoroughly researched what little is known about the trial.

Critical Essay by Mark Neyman from Gale. ©2005-2006 Thomson Gale, a part of the Thomson Corporation. All rights reserved.