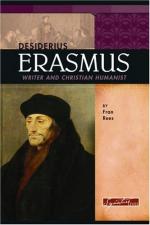 Get Critical Essay by Victoria Kahn from Amazon.com
View the Study Pack

This literature criticism consists of approximately 46 pages of analysis & critique of Desiderius Erasmus.

In the following essay, Kahn relates the dispute between Luther and Erasmus on free will in order to highlight the paradoxes in Erasmus's positions on folly and prudence.

Vide, huc perpulit Diatriben imprudentem invicibilis et potentissima veritas, et stultam fecit sapientiam eius, ut contra nos dictura, pro nobis se dicere cogeretur. [See how the invincible and all-powerful truth has cornered witless Diatribe and turned her wisdom into folly, so that while meaning to speak against us, she is compelled to speak for us and against herself.]

When Erasmus criticized Luther's decision to publish the paradox of enslaved will (LE 41, 134) to the world for fear of the offense it would cause “pious ears,”1 Luther replied ironically that paradox is everywhere apparent in...

More summaries and resources for teaching or studying Desiderius Erasmus.

Critical Essay by Victoria Kahn from Gale. ©2005-2006 Thomson Gale, a part of the Thomson Corporation. All rights reserved.