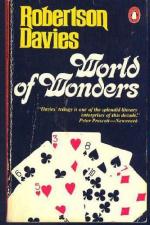 This literature criticism consists of approximately 4 pages of analysis & critique of Robertson Davies.

[In the following essay, which was based on an interview with Davies, Farnsworth presents the novelist's views on Canadian culture and politics.]

When American invaders crossed the Niagara frontier during the War of 1812, they came upon the family farm of one of the forebears of the author Robertson Davies and were astonished to find angry youths shooting at them from the farmhouse windows.

"They thought we'd be delighted to lay down the hateful British yoke, but they didn't think they were bringing another kind of yoke with them," said the man some consider to be Canada's greatest living writer.

Four of his ancestors fell in that engagement, the Battle of Stoney Creek, and he is proud that it helped to turn the tide against the invaders.

That Canadians are distinct from...