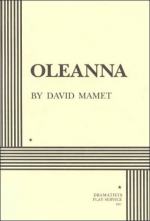 Get Critical Review by Stanley Kauffmann from Amazon.com
View the Study Pack

In the following review, Kauffmann assesses Oleanna, arguing that the film version is only slightly better than the play.

David Mamet dazzles. Here are a few selections from his crowded career (and he's not yet 50). Film: House of Games, which he wrote and directed; the screenplays of The Verdict and of Hoffa. Theater: The Water Engine, American Buffalo, Glengarry Glen Ross, The Shawl, Speed the Plow, a version of Uncle Vanya (now filmed, reviewed here two weeks ago). He has published books of essays, and his first novel has just appeared. He has taught acting in several universities.

His plays and his original screenplays differ in style and intent, but most of them share some characteristics: a sense of life as tangle, of truth as prismatic and mercurial, of secrecy and deception as contemporary dynamics. Now a change...

Critical Review by Stanley Kauffmann from Gale. ©2005-2006 Thomson Gale, a part of the Thomson Corporation. All rights reserved.