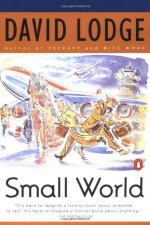 Get Critical Essay by John Fawell from Amazon.com
View the Study Pack
View the Lesson Plans

In the following essay, Fawell examines Lodge's parody of contemporary literary theory and academic careerism in Small World. Fawell notes that, despite its humorous dissection of academic hypocrisy and impotence, the novel contains sexual and quest motifs more consistent with the romance genre than satire.

David Lodge updates the minor genre of the academic novel in his 1984 work, Small World, by pondering two relatively contemporary aspects of Academics: the influence of modern technology and the malaise of the contemporary critical theory scene. In his prologue he asks what Chaucer must think as he, like his hero Troilus,

looks down from the eighth sphere of heaven on “This little spot of erthe that with the se / Embraced is” and observes all the frantic traffic around the globe that...

Critical Essay by John Fawell from Gale. ©2005-2006 Thomson Gale, a part of the Thomson Corporation. All rights reserved.