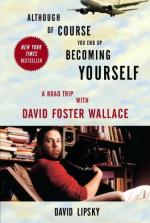 Get Critical Review by Lawrence Norfolk from Amazon.com
View the Study Pack
Related Topics
Everything Is Green
The Other Two
Good Old Neon
The Soul Is Not a Smithy
This Is Water: Some Thoughts, Delivered on a Significant Occasion, About Living a Compassionate Life

In the following review, Norfolk places Wallace within the tradition of contemporary American authors and views him as one of the few American writers who addresses quintessentially American themes and questions.

The radical problem besetting contemporary American fiction at present is that the United States corresponds almost exactly with its image in popular culture, but not quite. Scrappy fragments of the real United States may fly about the crisp outlines of its televisual simulacrum but, within the mediated frame of our United Kingdom-based perception, such discrepancies are minor disruptions. It is easier to edit them out than act on the suspicions they arouse. The image sharpens and becomes more convincing and, in consequence, the mediated US grows familiar and conventional, more realistic than the Real, its lurid and alluring affects more compelling.

Critical Review by Lawrence Norfolk from Gale. ©2005-2006 Thomson Gale, a part of the Thomson Corporation. All rights reserved.