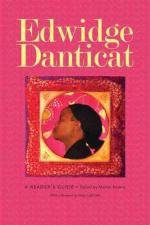 Get Critical Review by Jordana Hart from Amazon.com
View the Study Pack
Related Topics
Brother, I'm Dying
Everything Inside

This literature criticism consists of approximately 3 pages of analysis & critique of Edwidge Danticat.

In the following review, Hart commends Danticat for providing "honest and loving portraits of Haitian people, both on the island and in the United States."

More than anything else, the storytelling of the young Haitian-American writer Edwidge Danticat has given the world honest and loving portraits of Haitian people, both on the island and in the United States. She has smashed the numbing stereotypes created by a barrage of media accounts of Haitian poverty, misery and death.

Danticat's debut novel, Breath, Eyes, Memory, garnered international acclaim last year. In her new book, a collection of nine short stories called Krik? Krak!, she draws on her experience growing up in dictatorial Haiti as well as stories of Creole culture and myth.

Danticat, 26, a teller of stories in the truest sense, takes us heart-pounding into a breathtaking...

Critical Review by Jordana Hart from Gale. ©2005-2006 Thomson Gale, a part of the Thomson Corporation. All rights reserved.