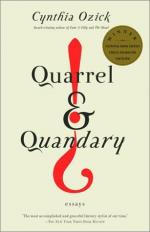 Get Critical Essay by Sarah Blacher Cohen from Amazon.com
View the Study Pack

This literature criticism consists of approximately 19 pages of analysis & critique of Cynthia Ozick.

In the following essay, Cohen explores Ozick's sense of Jewish identity and its effect on her writing.

The waning of the immigrant experience and the depletion of the Yiddish culture which so enriched that experience have prompted some critics to write an epitaph for the dying body of Jewish-American writing in the postwar period. Thus, Ruth Wisse has written that Jewish-American literature “derives its strength from the peculiar tension of the Jew who is native to two cultures while fully at home in neither; hence the more fully the Jew becomes integrated into the larger culture, the less the tension and the fewer the creative energies generated by it.”1

This charge may apply to the totally assimilated Jewish...

Critical Essay by Sarah Blacher Cohen from Gale. ©2005-2006 Thomson Gale, a part of the Thomson Corporation. All rights reserved.