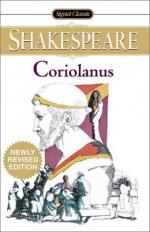 Get Coriolanus and the Failure of Performatives from Amazon.com
View the Study Pack
Related Topics
The Winter's Tale
Venus and Adonis

Young people today can be said to be in a situation where ordinary common sense no longer suffices to meet the strange demands life makes. Everything has become so intricate that mastering it would require an exceptional intellect. Because skill at playing the game is no longer enough; the question that keeps coming up is: can the game be played at all now and what would be the right game to play? (welches ist das rechte Spiel?)

I. INTRODUCTION: WHOSE TRAGEDY?

Neither the tragedy "of a people that has lost its hero" as Brecht argues, nor simply that of the lone figure of Coriolanus himself, Coriolanus is the tragedy of the gap that looms between the private "true" Self and a public realm of tacitly accepted opportunistic mendacity.2 The public world in Coriolanus is—very like that of Richard III—characterized by language...

Coriolanus and the Failure of Performatives from Gale. ©2005-2006 Thomson Gale, a part of the Thomson Corporation. All rights reserved.