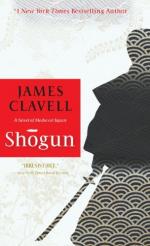 Get Critical Review by Everett Groseclose from Amazon.com
View the Study Pack

This literature criticism consists of approximately 3 pages of analysis & critique of James Clavell.

In the following review, Groseclose praises Clavell's Thrump-o-moto for its appeal to adults as well as children.

How else can one explain the author's latest entry into the world of books? Not another Tai-Pan or Shogun—but rather a handsome, oversized children's story called Thrump-O-Moto.

Since Mr. Clavell's only other children's story was published 23 years ago, this new one is a departure worthy of note. His Whirlwind, the fifth in his series of Asian sagas that also will reach book-sellers soon, fetched a reported record $5 million for U.S. rights alone at a publisher's auction back in January.

Whatever the author's reasons for doing the book, Thrump-O-Moto is a delightful yarn. This reader's 14-year-old daughter, a discerning veteran of countless children's stories good and bad, swiped the book...

Critical Review by Everett Groseclose from Gale. ©2005-2006 Thomson Gale, a part of the Thomson Corporation. All rights reserved.