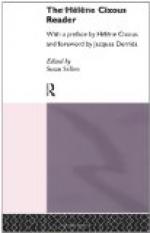 Get Critical Essay by Brian Duren from Amazon.com
View the Study Pack

This literature criticism consists of approximately 23 pages of analysis & critique of Hélène Cixous.

Duren is an American educator. In the essay below, he notes that Cixous, in such works as La jeune née and Prénoms de personne, attempts to undermine and subvert traditional notions of literature and language.

… often I have wondered whether, taking a large view, philosophy has not been merely an interpretation of the body and a misunderstanding of the body.

The name. Bizarre. Cixous? That's not French. Not proper. It's a non-name. Foreign. Strange. An impossible name. Not proper to French. "A name that no one knew how to write and it was me." An improper name. "That's a name!… It was enough to get you thrown...

More summaries and resources for teaching or studying Hlne Cixous.

Critical Essay by Brian Duren from Gale. ©2005-2006 Thomson Gale, a part of the Thomson Corporation. All rights reserved.