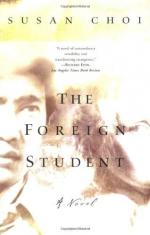 [In the following review, Dickinson comments on Choi's handling of the formal and thematic elements of The Foreign Student.]

The Korean War (1950–53) is sometimes called America's forgotten war. It took M∗A∗S∗H to bring the 38th Parallel out from the shadows of Allied victory in WWII and the debacle of Vietnam. What must not be forgotten, of course, is that 54,000 Americans gave their lives in Korea, a sacrifice equaling that of the more-publicized and controversial Vietnam War.

Against this Fifties backdrop. Susan Choi sets her first novel, The Foreign Student. Chang Ahn loses his comfortable youth as a professor's son in 1950 when war breaks out on the Korean Peninsula. Family and friends separate and scatter. In a deft interplay between the story of Chang's student year abroad and the back-story of his wartime survival...

More summaries and resources for teaching or studying Susan Choi.

The Foreign Student from Gale. ©2005-2006 Thomson Gale, a part of the Thomson Corporation. All rights reserved.