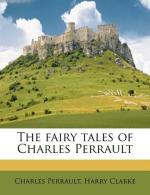 Get Critical Essay by Jeanne Morgan from Amazon.com
View the Study Pack

This literature criticism consists of approximately 27 pages of analysis & critique of Charles Perrault.

In the following essays, Morgan analyzes Perrault's development of the prose conte (tale) in relation to other prose and verse forms of the era, and offers reasons for Perrault's lasting literary significance.

The Creation of a Modern Genre

Perrault's Contes du temps passé were selected by him to represent traditional French tales which illustrated the superior moral character of modern culture. In terms of structure and expression, however, the Contes are not traditional at all. Each tale is composed of a brief title, a short narrative in prose, and a one-or two-stanza moral which offers a sophisticated commentary upon the text. This pattern does not in fact correspond to a previously established literary form. How then did this new genre arise, and how may it be defined...

More summaries and resources for teaching or studying Charles Perrault.

Critical Essay by Jeanne Morgan from Gale. ©2005-2006 Thomson Gale, a part of the Thomson Corporation. All rights reserved.