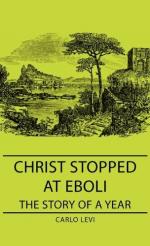 Get Critical Review by C. G. Paulding from Amazon.com
View the Study Pack

In the following favorable review, Paulding applauds the compassionate and evocative portrayal of the peasants of Gagliano found in Christ Stopped at Eboli.

When the Italians set forth to conquer the world, starting with Ethiopia, they attended to one little detail by requesting Carlo Levi to live very quietly until further notice within the limits of a village called Gagliano, which is in the province of Lucania, a miserably sad, malarial and abandoned region just north of the Gulf of Taranto. It is just north of Calabria which is abandoned also. Carlo Levi lived in Gagliano for a year or so, and in this book [Christ Stopped at Eboli] writes about what he saw, what he heard, what the peasants told him, what he thought.

He thought and the peasants thought...

Critical Review by C. G. Paulding from Gale. ©2005-2006 Thomson Gale, a part of the Thomson Corporation. All rights reserved.