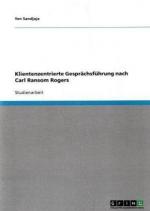 Get Interview by Carl Rogers and Mary Harrington Hall from Amazon.com
View the Study Pack

This literature criticism consists of approximately 20 pages of analysis & critique of Carl Rogers.

[Hall]: Shall we talk about groups—encounter groups, T-groups, sensitivity-training groups, group therapy? The group phenomenon demands exploration and explanation. And I've wondered … are people drawn toward this intense group experience because they feel loneliness and alienation in our strange society?

[Rogers]: Of course that's a major reason. Out of the increasing loneliness of modern culture, we have in some social sense been forced to develop a way of getting closer to one another. I think encounter groups probably bring people closer together than has ever been true in history except with groups of people together during crisis. You put men...

More summaries and resources for teaching or studying Carl Rogers.

Interview by Carl Rogers and Mary Harrington Hall from Gale. ©2005-2006 Thomson Gale, a part of the Thomson Corporation. All rights reserved.