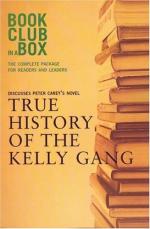 Get Critical Essay by Robert Ross from Amazon.com
View the Study Pack
Related Topics
A Long Way From Home: A Novel

This literature criticism consists of approximately 23 pages of analysis & critique of Peter Carey.

SOURCE: "'It Cannot Not Be There': Borges and Australia's Peter Carey," in Borges and His Successors: The Borgesian Impact on Literature and the Arts, edited by Edna Aizenberg, University of Missouri Press, 1990, pp. 44-58.

In the following essay, Ross focuses on Carey's short stories as he speculates on the influence of Argentine writer Jorge Luis Borges's works on Carey's artistic development.

You're quite right when you suggest that it might be difficult to say exactly how Borges may have influenced me, also right to suggest that the influence is/was there…. It is there, it cannot not be there.

On first reading Peter Carey's writing, I found it different from other Australian literature, and I resolved this encounter with the unexpected by making broad and perhaps obvious comparisons: Carey belongs more to the world tradition than to the Australian; more specifically, his work suggests South...

Critical Essay by Robert Ross from Gale. ©2005-2006 Thomson Gale, a part of the Thomson Corporation. All rights reserved.