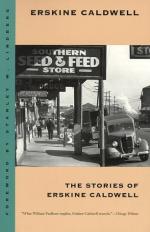 Get Critical Essay by Carl Bode from Amazon.com
View the Study Pack

Bode was an American critic, educator, and poet. In the excerpt below, he disparages Caldwell's artistry generally but judges his short stories superior to his novels: "the sagging architecture which weakens all his novels does not develop in the short stories. They are better for being brief."

God's little Acre and the rest of Caldwell's hot and shoddy novels make much money for him but add nothing to his literary reputation. This is not true for his short stories. The Complete Stories of Erskine Caldwell (1953) gives us a chance to see him to better advantage.

Most of these tales are set, as one might expect, in the same South as God's little Acre. A few of the remainder are set in New England, where Caldwell spent several early years trying to sell...

Critical Essay by Carl Bode from Gale. ©2005-2006 Thomson Gale, a part of the Thomson Corporation. All rights reserved.