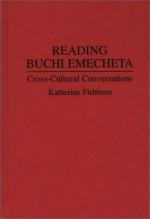 This literature criticism consists of approximately 12 pages of analysis & critique of Buchi Emecheta.

In the following excerpt, Loflin examines the significance of household environments and architecture in The Joys of Motherhood as indicative of tension between traditional Nigerian communal life and the social pressures of Western modernization.

African women writers are sensitive, perhaps to a fault, to the preexisting images of woman's space. Their preoccupation with motherhood and/or barrenness as the crucial element in women's lives, in novels such as Efuru, The Joys of Motherhood, The Bride Price, and So Long A Letter has led Obioma Nnaemeka to characterize these works as “motherhood literature.” Elaine Savory Fido has identified the original “motherland” as the mother's body—that with which we identify, from which we learn to separate. The mother country is also the...

Critical Essay by Christine Loflin from Gale. ©2005-2006 Thomson Gale, a part of the Thomson Corporation. All rights reserved.