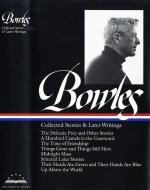 Get Critical Essay by Irving Malin from Amazon.com
View the Study Pack

This literature criticism consists of approximately 3 pages of analysis & critique of Paul Bowles.

[Although] the meticulously described landscape changes [in The Collected Stories], the situation of Bowles' heroes remains the same.

The hero is usually a displaced person; he is suddenly, often brutally compelled to see the "heart of darkness." He is abused, violated, transformed. But Bowles refuses to allow him more than a few seconds of understanding; his broken hero disappears under "the sheItering sky."

Although we expect some final clarification of the disturbing mysteries—some "sense of an ending" … we merely discover more shadows. There is no ultimate, rational solution—even after abrupt mutilations of self. It is, indeed, the sustaining axiom of these stories that the self—or the outside world—is tentative, fragile, and obscure. Bowles disdains any psychological explanation (except indirectly); he offers moments of ecstasy and fright—these are oddly married—and not the causes, preconceptions, or origins of the moments.

More summaries and resources for teaching or studying Paul Bowles.

Critical Essay by Irving Malin from Gale. ©2005-2006 Thomson Gale, a part of the Thomson Corporation. All rights reserved.