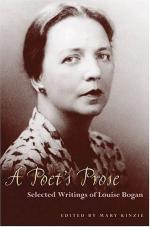 Get Critical Review by Richard Eberhart from Amazon.com
View the Study Pack

This literature criticism consists of approximately 3 pages of analysis & critique of Louise Bogan.

Eberhart was an American poet, playwright, and educator. In the following review of Collected Poems, 1923–53, he praises the depth and forceful emotion of Bogan's work.

Louise Bogan's poems adhere to the center of English with a dark lyrical force. What she has to say is important. How she says it is pleasing. She is a compulsive poet first, a stylist second. When compulsion and style meet we have a strong, inimitable Bogan poem.

There is relatively little technical innovation in her poems. She writes mainly in traditional verse forms, handled with adroitness and economy. The originality is in the forceful emotion and how this becomes caught in elegant tensions of perfected forms. She has delved in antique mysteries and brought up universal charms from deep sources, from a knowledge of suffering and from...

Critical Review by Richard Eberhart from Gale. ©2005-2006 Thomson Gale, a part of the Thomson Corporation. All rights reserved.