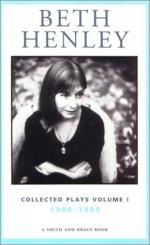 Get Critical Review by Tom Jacobs from Amazon.com
View the Study Pack

This literature criticism consists of approximately 2 pages of analysis & critique of Beth Henley.

In the following mixed review, Jacobs maintains that Control Freaks “is often as darkly hilarious as it is startling.”

Control Freaks is almost surely the first R-rated play to use the services of Flying by Foy. Beth Henley's latest comedy, a mixture of sexual perversity and serial acrobatics, is often as darkly hilarious as it is startling.

Henley falters in the final scenes, when she unwisely attempts to shift the mood radically and explain her characters' bizarre behavior. But the play contains wonderful writing, and the production proves she is an excellent director of her own work.

Carl, whose surface attempts to embody coolness hide his increasing...

Critical Review by Tom Jacobs from Gale. ©2005-2006 Thomson Gale, a part of the Thomson Corporation. All rights reserved.