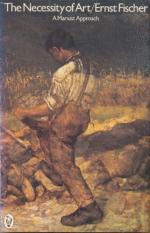 Get Critical Essay by Yorick Blumenfeld from Amazon.com
View the Study Pack

This literature criticism consists of approximately 2 pages of analysis & critique of John Berger.

Art and Revolution, while purporting to be a book on [Soviet sculptor Ernst] Neizvestny and the role of the artist in the U.S.S.R., actually is a brilliant chapter in Berger's continuing inner debate on the social role of the artist and his obligations to society.

He believes that art criticism, at its best, is a form of intervention between the work of art and its public. Thus his essay on Neizvestny becomes a creative "intervention." (p. 99)

Berger maintains that Neizvestny is not opposing "private" art to "public" art...

More summaries and resources for teaching or studying John Berger.

Critical Essay by Yorick Blumenfeld from Gale. ©2005-2006 Thomson Gale, a part of the Thomson Corporation. All rights reserved.