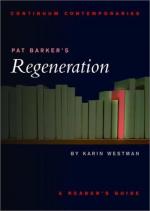 Get Critical Review by Kathleen Jamie from Amazon.com
View the Study Pack
Related Topics
The Silence of the Girls
The Women of Troy: A Novel

This literature criticism consists of approximately 2 pages of analysis & critique of Pat Barker.

Jamie is a Scottish poet, dramatist, and critic. In the following review of The Man Who Wasn't There, she applauds Barker's ability to draw interesting characters but suggests that the novel's plot is somewhat confusing.

The man who wasn't there is Colin's father. "Shot down", says Viv, his mum; "Buggered off", thinks Colin. He noticed on the first day at school his birth certificate was shorter than everyone else's. Now that he can read he's not going to wait till he's twenty-one to be told about his father, as Viv says he must. Next time Viv goes out to serve as waitress in a nightclub, he rifles the old handbag in the wardrobe till he finds the certificate. Against the space for his father's name is a blank.

More summaries and resources for teaching or studying Pat Barker.

Critical Review by Kathleen Jamie from Gale. ©2005-2006 Thomson Gale, a part of the Thomson Corporation. All rights reserved.