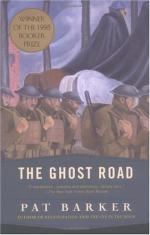 Get Critical Essay by Paul Levy from Amazon.com
View the Study Pack
View the Lesson Plans
Related Topics
The Silence of the Girls

Pat Barker
This literature criticism consists of approximately 1 page of analysis & critique of The Ghost Road.

Below, Levy remarks on the awarding of the Booker Prize to The Ghost Road and criticizes the novel as anachronistic.

The Booker Prize jury has added insult to the ayatollahs' injury, cheating Salman Rushdie of the £20,000 ($31,600) 1995 Booker Prize for Fiction. In its 27th year, Britain's most celebrated (though no longer richest) award for a book has been given to Pat Barker for her The Ghost Road, which this year's Booker chairman, George Walden, praised faintly as "clear, hard prose." Following the heavily applauded announcement, several jubilant commentators said it was about time that a woman won again….

Ms. Barker's The Ghost Road is the final part of her World War I trilogy, in which she successfully mixes fictional characters with historical ones such as W.H.R. Rivers, the army psychologist who pioneered the...

Critical Essay by Paul Levy from Gale. ©2005-2006 Thomson Gale, a part of the Thomson Corporation. All rights reserved.