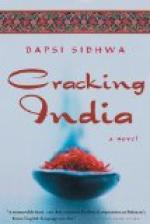 Get Critical Essay by Ambreen Hai from Amazon.com
View the Study Pack

This literature criticism consists of approximately 66 pages of analysis & critique of Cracking India.

In the following essay, Hai discusses Sidhwa's Cracking India in terms of the rubric of border-crossing in postcolonial literature.

Borderlands […] may feed growth and exploration or […] conceal a minefield.

It is the intersections of the various systemic networks of class, race, (hetero)sexuality, and nation, then, that position us as “women.”

In Rudyard Kipling's short story “On the City Wall,” the border between city and country, between British control and Indian resistance, and between colonizer and colonized is occupied by the fantastical figure of Lalun, the “exquisite” courtesan, entertainer, and artist, on whose hospitable grounds men of all races and religions amicably meet.1 Literally located on the border of Lahore (now a border city...

More summaries and resources for teaching or studying Cracking India.

Critical Essay by Ambreen Hai from Gale. ©2005-2006 Thomson Gale, a part of the Thomson Corporation. All rights reserved.