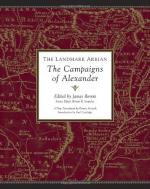 Get Critical Essay by Ronald Syme from Amazon.com
View the Study Pack

This literature criticism consists of approximately 40 pages of analysis & critique of Arrian.

In the following essay, Syme offers an account of Arrian's career as a public official, analyzing the order in which Arrian possibly composed his writings and commenting on Arrian's literary and intellectual development.

When senators compose history they are not always eager to obtrude their occupations or any travels in foreign parts. Erudite enquiry has to seek after hints or traces in the writings, a seductive pastime but often hazardous and liable to deceive.

Arrian excites curiosity on various counts. It is baffled by problems of dating, which extend to the lost works. In his manifold productivity two opuscules belong to the period when under Hadrian he governed the military province of Cappadocia (?131-137). Next, he indited the treatise on hunting and the Discourses of Epictetus after he had retired to Athens early...

More summaries and resources for teaching or studying Arrian.

Critical Essay by Ronald Syme from Gale. ©2005-2006 Thomson Gale, a part of the Thomson Corporation. All rights reserved.