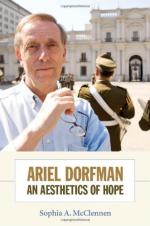 Get Critical Review by Margarita Nieto from Amazon.com
View the Study Pack

This literature criticism consists of approximately 4 pages of analysis & critique of Ariel Dorfman.

In the following review, Nieto comments on the strengths and weaknesses of the stories collected in My House Is on Fire, noting that all of the stories “reflect the omniscient presence of a repressive military state.”

In the aftermath of the political changes that have swept across Eastern Europe and Asia during the last six months, two images stand out the horrifying massacre in Tian An Men Square and the joyful reunion of a once-divided people dancing on the Berlin Wall. As mute reminders of the universal meaning of oppression and freedom, they symbolized the power of political actions in human terms. Yet, the dramatic poignancy of these two events also served to underplay the conflicts between repression and political choice that recently affected our own continent in Latin America.

Critical Review by Margarita Nieto from Gale. ©2005-2006 Thomson Gale, a part of the Thomson Corporation. All rights reserved.